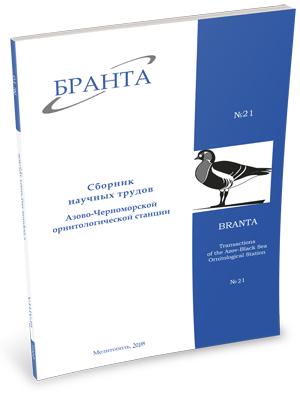 The paper reviews key breeding sites of grassland waders: Lapwing (Vanellus vanellus), Redshank (Tringa totanus) and Black-tailed Godwit (Limosa limosa) in the basin of upper Prypiat’ river (Volyn and Rivne regions of Ukraine). Also, the census results of grassland waders on those sites since 1983 are presented. In total, 29 sites are listed and their geographic coordinates are provided alongside with the territory map (Table 1).
The listed sites are proposed as monitoring plots to observe the dynamics and changes in the distribution of grassland waders in the region. Having coordinates listed, they can be also used for GIS analysis of wader habitats and for species distribution modeling (SDM).
In general, on all of the listed sites steep, statistically significant decline in waders numbers is observed. Total number of Lapwing decreased in the last 36 years in 2.1 times, Redshank – 1.4, and Black-tailed Godwit – 3.2 times. Besides stable monitoring plots, a lot of small, one-species breeding sites of Lapwing have disappeared. Therefore this might increase the estimation of decline in Lapwing numbers up to 3–3.5 times. When analyzing changes in mean numbers of breeding colonies in each of species using data from 134 additional breeding sites in Western Polissia, we also found significant decline with some stabilization or even increase in early 2000-s.
In our opinion, the main cause of numbers decline in all three species is degradation of breeding habitats. It is caused by overgrowing with shrubs and tall grasses after stopping of grazing or decrease in grazing intensity in last decades, and as a result of land drainage.
The dynamics of development of the situation with the biotopes and population sizes of waders is extremely negative and will doubtfully change in the nearest future. This will cause cessation of many colonies of Lapwing, Redshank and Black-Tailed Godwit in the region, and mentioned species will become regionally rare. Taking into account that the most important breeding sites for grassland waders are located in Polissia, especially in the case of Black-tailed Godwit, the situation will have the national scale. We recommend to follow the IUCN red list of threatened species and consider a possibility to include Lapwing and Black-tailed Godwit to national Red List.