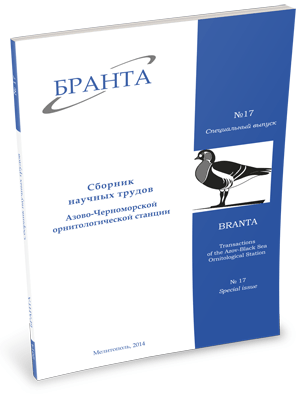 The article presents data from studies covering all periods of the annual cycle of birds (spring migration, nesting, wintering and autumn migration) on the three control power lines in the Steppe Crimea - in the west of the peninsula along the coast of Lake Sasyk the north - along the coast of the Gulf of Siwash and the east – in the center of the Kerch Peninsula. As a result, obtained the original information on the annual dynamics of species composition and numbers of birds in these parts of the Crimea, as well as information about the death of some of them from contact with power lines. During the research of along controlled lines accounted for 192961 individuals of 184 bird species, of which 32 532 individuals in the Western Crimea, 18400 - on the Kerch Peninsula and 145786 - at the Sivash. Quantitatively dominated (high to low abundance) Tadorna tadorna, Sturnus vulgaris, Larus ridibundus, Anas platyrhynchos and Larus cachinnans, subdominant were Larus canus, Calidris alpina, Corvus frugilegus, Anser albifrons, Corvus monedula, Larus melanocephalus, Melanocorypha calandra, Philomachus pugnax and Anas crecca. Accordingly, these species were exposed to the most likely to die from contact with power lines. Among the accounted species - 37 listed in the Red Book of Ukraine (2009). The case of the death of birds from electric shocks have been identified, while the collision with the wires on the three control sites killed 125 individuals, of which the largest number were in the Western Crimea - 58.4%, while at the Sivash - 27.2%, in the Kerch peninsula - 14.4%. Among the dead birds, the majority made up of Gulls (among which the most numerous was Larus cachinnans), Corvids (Corvus monedula, C. frugilegus), small Passerines (Sturnus vulgaris), Waders (Philomachus pugnax) and Gruiformes (Otis tarda). Almost half of the birds died in the first half of April, and in mid-August, that is, during the most massive spring and autumn migration of most species of birds in the region. In general, the frequency of bird deaths did not depend on the total number of them along the transmission line, as well as from atmospheric precipitation (mist, fog, drizzle, rain, snow), order to quickly notice wires and fly around them. General trends negative impact the power lines on wild birds have not been established, and the collision with the wires depend on the specific local factors. The collision probability is higher in areas of stable concentrations of birds with constant local movement in the area of power transmission lines. Collisions often occur only in certain sections of power lines, which apparently crossed the corridors of local movements of birds. Such corridors are quite compact, their identification and arrangement of bird protection devices will be more efficient and cheaper than the arrangement of the entire transmission line. Special studies should be aimed at the development of recommendations on the optimal placement of power lines, the use of devices that prevent the birds of a wire, as well as devices, excluding the “closure” of birds electrochain. Emphasis should be placed on assessing the risk from different types of power lines in different areas and landscapes, especially in the important bird areas for accumulation and subsequent replication of the experience of these studies, as well as the body of knowledge on this issue. With this in mind, it is necessary to require the mandatory inclusion of ornithological expertise in EIA (assessment of the impact on the environment) construction power lines, which is based on the four-time study (covering the periods of spring migration, breeding, fall migration, hibernation), and develop preliminary recommendations on the location of the pillars, orientation lines and conduct bird protection measures, as well as the selection of devices that attract or distract birds (sites for rest, artificial nests, etc.). Prevent bird deaths may contribute to the power lines installation of artificial nests for Saker, who expels many species with his own nesting territory, especially small birds. This method will help to restore area of this falcon, listed in the Red Book of Ukraine (2009) and lists a number of international environmental conventions, and through it - a positive image of Energy aimed at the greening of its operations. Given the fact that the power line medium power - 35-110 kV. were not so dangerous for most birds, further studies should be carried out primarily at 6-10 kV power transmission line These transmission lines have a higher probability of death of the birds, not only from physical contact with the wires, but also on the electric current. Stretches of transmission lines that cross the objects of nature reserve fund, bordered with them or are located close to them, should be a priority for the survey and conduct bird protection measures.