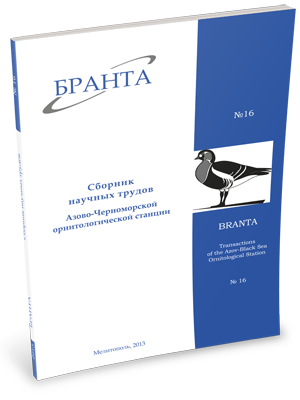 Language of the article: Ukrainian Cite: Fesenko, H. V. (2013). Perspectives of using compound nouns to form a national nomenclature of the birds of the world (by the example of family Hummingbirds (Trochilidae). Branta: Transactions of the Azov-Black Sea Ornithological Station, 16, 26-48 Keywords: compound noun, Ukrainian nomenclature of birds, names of genera of hummingbirds, avifauna of the world Views: 477

The work throws light upon progressive use of compound nouns in forming the Ukrainian names of bird genera and species of native fauna, as well as to some degree for the national nomenclature of the world birds. It outlines how compound nouns and other similar lexical forms are used in a function of bird names of Europe and Northern Asia in several Slavonic languages and in two world-wide international languages (English and German).

The paper shows that the same form and function of compound nouns are used for the names of the birds in four Slavonic languages (Bulgarian, Belorussian, Russian and Ukrainian) of six analyzed. Based on the publication «Handbook of the Birds of the World», Ukrainian names for 102 hummingbird genera are proposed. Most of them include compound nouns. Appositions of the names are borrowed from several foreign languages, nouns of Ukrainian general vocabulary and neologisms are also used.