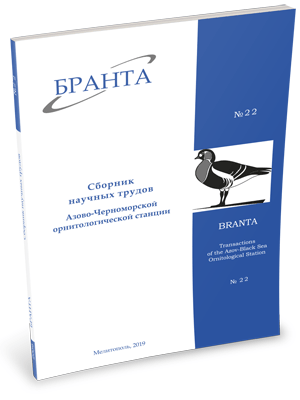 Sivash is wetland that includes the largest bay of the Sea of Azov as well as its shoes with smaller bodies of water. Our
investigations were carried out in spring 2018 and spring-summer 2019 within 6 control sites of the northern coast of Western Sivash. There were 201 bird species noted within the study area (Table 4), including 100 breeding species: 79 – were breeding with certainty and 21 – probably breeding (Table 2). Nesting of 21 more species was possible but probability of this was less or their breeding was irregular. Other species were predominantly summering, feeding, late migrants or possibility of their breeding was minimal. Among the breeding birds there were 15 rare species from the Red Book of Ukraine (2009). Study area is the most important for breeding of Charadriiformes (18 species, up to about 3000 pairs), Ciconiiformes (10 species, up to about 170 pairs) and Anseriformes (12 species, about 80 pairs).
Most of waterbirds were breeding on islands and salt flats and they were mainly concentrated in breeding colonies. For the numerous species of Nonpasserines and hydrophilic species of Passerines the most important wetlands during the breeding period were freshwater bodies and meadows, even though their area was only 4.3% and 12.9%, respectively. Such habitats were predominant at the
control site 2 (near Pershokonstantinovka) and 6 (ponds near Stroganovka). And it was here that the highest total number of birds was counted. The most important areas for the maintenance of species diversity of birds were control sites 1 (144 species) and 6 (156 species), where maximum number of rare species also was observed (26 and 29, respectively).
Bird population of the Western Sivash coast during the breeding period is closely connected with anthropogenic lands: villages, households, supporting buildings, electric power lines, bridges, ponds, artesian wells and canals. Creation of freshwater ponds, formation of grasslands, islands and shallow waters around the artesian wells, moderate cattle grazing have a positive effect. Many waterbirds nest and feed in ponds and water bodies near artesian wells, most species use them for bathing and drinking water. Overgrazing that often lead to the destruction of nests with eggs by cattle or sheepdogs, poaching, Artemisia extraction, disturbance of birds by working machinery are negative factors. Breeding success in colonies of Charadriiformes often was low owing to predation of Marsh Harriers, Hooded Crows, foxes and stray dogs, especially when islands connect to land owing to low water level within hot period.