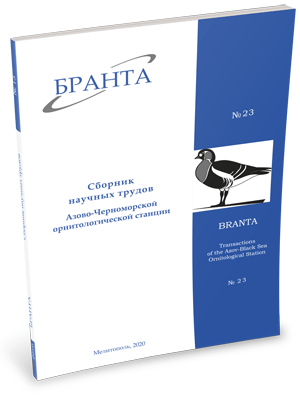 Settlement dynamics of the Isabelline Wheatear Oenanthe isabellina (Temm.) on the Crimean Peninsula

1 – I. I. Schmalhausen Institute of Zoology of the National Academy of Sciences of Ukraine;
2 – Taurida National V. I. Vernadsky University, Simferopol, Crimea Republic, Ukraine.

The expansion of Oenanthe isabellina in Ukraine began at the end of 1950s - early 1960s. The Isabelline Wheatear settled along the coast of the Sea of Azov from east to west and appeared on the Crimean Peninsula later than in the regions located to the west of it. Since the late 1960s, this species has been nesting near the mouth of the Dnipro River which located in the west of the Crimean Peninsula. The nesting of Oenanthe isabellina was found in the northern part of the Crimean Peninsula in 1973. In the mid-1980s, the Isabelline Wheatear inhabited the northwestern coast of Crimea and appeared far in the east - on the Kerch Peninsula.  In the southeastern part of the peninsula the range of the Wheatear reached the Black Sea coast by the end of the 1980s, when the species nesting was found near Feodosia. In the southeastern part of Crimea, the Isabelline Wheatear continued to settle along the Black Sea coast in a westerly direction in the 1990s: its nesting was found near Sudak. In the central Crimea, the species range reached the northern foothills of the Crimean Mountains at this time. The species expansion to the south slowed down by the beginning of the 2000s. In the western Crimea, the southernmost settlement of the Isabelline Wheatear was found near Evpatoria. In the northern foothills of the Crimean Mountains (Central Crimea), the range border has not changed. There were no significant changes in the southeastern Crimea during this period - in the 2000s, O. isabellina nested near Sudak as in the 1990s. The species expansion almost stopped in Crimea in the 2010s. The settling of the Isabelline Wheatear in the steppe regions of the southwestern Crimea did not occur, possibly due to the absence of little ground squirrel settlements, whose burrows birds usually use for nesting. The border of the O. isabellina range has moved southward on about 100 km for three decades - from the beginning of the 1970s to the beginning of the 2000s -, i.e. the settlement speed of the species in Crimea was about 3 km per year.