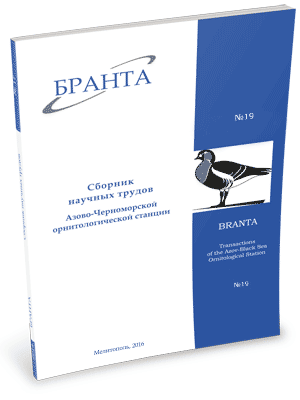 To the 100th birthday anniversary of M.A.Voinstvensky

February 14, 2016, was marked as the 100th birth anniversary of the ornithologist, the doctor of Biological Sciences, the professor, the honored scientist Mikhail Voinstvensky, widely known on the territory of the former Soviet Union and beyond. Mikhail Anatolyevich was born in an intellectual family of the family doctor and the teacher. He graduated from the school in Kiev in 1930. In 1931-1932 he studied at the Kiev Agronomic Technical School. Curiosity and love for nature manifested from childhood, eventually developed into the incendiary passion of the researcher, in the desire to learn more about the animal world, to penetrate into the essence of the phenomena and processes taking place in it.

Since 1933, M.A. Voinstvensky studied at the Biological Faculty of the Kiev State University, in 1938 he graduated with honors. As he claimed, he was very lucky to have such the teachers as V.M. Artobolevsky, I.I. Shmalhausen, M.M. Voskoboinikov. Under their influence, as a student, the scientific interests of a young researcher as an ornithologist, a zoogeographer, a systematist, an evolutionist were formed. A talented and gifted student was proposed to work in the Zoological Museum of the Kiev State University. During his postgraduate studies, Mikhail Anatolyevich pays special attention to research on the ecology and taxonomy of tits, nuthatches and treecreepers fauna of Ukraine and makes his first significant contribution in science by making a revision of the systematic membership of the genus AegithalosIn 1941, Mikhail Anatolyevich graduated from the postgraduate course and completed his Ph.D. thesis, but did not manage to defend it.

From 1941 to 1944 he was a participant in the Second World War. Upon his return to Kiev in 1944, M.A. Voinstvensky worked as a teacher at the Kiev State University and actively participated in its restoration, in the organization of educational and scientific work. Especially a lot of strength and energy he gave to the revival of the damaged by fascist Zoological Museum. He was that, who was sent to Moscow, where he showed great enterprise and took a large part of the expenses to ensure the return of the collections to Kiev.

In 1946, Mikhail Anatolyevich defended his Ph.D. thesis successfully. Its materials formed the basis for the monograph published in 1949 "Pits, Potholes, Tits of the Ukrainian SSR". In the same year, he got the title of associate professor of the Department of Zoology of Vertebrates. Since that time, he was engaged in research on the avifauna of the steppe zone of the European part of the USSR and the history of its formation. He studied the bony remains of the Pliocene bird Gryzaja odessana, which was previously considered waterfowl, and established that this bird belongs to the Bustard series. Mikhail Anatolyevich had enthusiasm for evolutionary questions in ornithology until his last days, which is confirmed by his statements about the belonging of wood pigeon to the genus of turtledoves, not to the bird family Columbidae.

Mikhail Anatolyevich specified the identity of individual finds and formulated original provisions on the ancestor of the form and the centers of origin of some birds. All this allowed developing new principles for zoogeographic zoning of the steppe zone and the Crimea. The result of these studies was a doctoral thesis on "The current state and origin of the avifauna of the Steppe zone of the European part of the USSR" (1956), which was published as a monograph in 1960.

In 1956, Mikhail Anatolyevich was invited to the post of head of the museum sector at the Institute of Zoology of the Academy of Sciences of the Ukrainian SSR. He ruled the reconstruction the museum's expositions and putting in order the stock of scientific collections. In 1959 the museum was reorganized into the department of vertebrates, which M. A. Voinstvensky headed more than 30 years. The main direction of this department was the study of the Ukrainian fauna, variability, taxonomy, the ecology of various species of birds, mammals and other vertebrates. Under his leadership, a number of large-scale scientific expeditions was conducted to study the fauna of Ukraine and nearby territories, as well as in the Caucasus, the coasts of the Barents, White, Baltic, Black and Caspian seas. He visited Sivash and the mountain lakes of Switzerland and Bulgaria. Mikhail Anatolyevich devoted a significant part of his life to the study of the avifauna of the deltas of the great rivers of Ukraine - the Dnieper, the Danube and the Dniester.

In 1960 he was awarded the title of professor. Under his leadership, the Institute of Zoology has developed a deep study of the ecology of hunting animals. In addition to basic research, M. A. Voinstvyshky paid much attention to the study of the applied importance of vertebrates (the ecology of hunting animals, nature conservation, the study of migration and wintering of birds). On his initiative, the department established a laboratory for the study of hunting fauna in the territory of Ukraine. Based on the results of these studies, a number of recommendations were developed and implemented through the Ministry of Forestry and the State Committee for Nature Conservation, in particular on boning and improvement of hunting facilities (registration, optimal density of hunting animals, feeding capacity of lands, planning game hunting and breeding of wild animals).

On the initiative of M. A. Voinstvensky, the group was organized in the department and deployed large-scale research on the migration of birds throughout Ukraine, which made it possible, along with a number of practical problems (requirements for the safety of aircraft movements, the transfer of viruses by wild birds, hunting facilities, etc.) put on a proper level the protection of valuable bird species, both on migration roads, and on the ground of mass wintering in the south of Ukraine.

The enthusiasm for the migration of birds prompted Mikhail Anatolyevich to create in the south of Ukraine, where the most massive migration routes of birds pass, ornithological station. His activity in this direction was successfully completed in 1985 by creating a rather unusual form for that time - the interdepartmental Azov-Black Sea ornithological station. The order for its creation was signed by the Vice-President of the Academy of Sciences of Ukraine and the Minister of Education of Ukraine. Since then, the ornithological station has been fruitfully working for more than 30 years, as a symbol of the commemoration of the memory of M. A. Voinstvistsky. Over the years, the department of vertebrates became the basis for the allocation of other units of the Institute (the museum department and the department of population ecology, the laboratory for the protection of terrestrial vertebrates - the present department for monitoring and conservation of wildlife).

M. A. Voinstvenskiy published more than 200 scientific and popular science works, including 18 monographs and books, which were highly appreciated by colleagues and had universal recognition. He masterfully owned the pen and was actively engaged in propaganda and popularization of ornithological knowledge in radio and television broadcasts.

It is difficult to overestimate the merits of M. A. Voinstvistsky in the training of young scientists. His fascinating talented lectures and excursions to nature have determined the scientific direction of more than one student. He had only 46 graduate students who successfully defended his Ph.D. He was a consultant of many searchers for doctoral dissertations and was an opponent.

For almost 20 years he headed on a voluntary basis the Ukrainian Society for the Conservation of Nature and the Reserve Management in Ukraine. For many years he headed the Ukrainian Ornithological Society, was its first president. The society united scientists of academic institutions, natural faculties of universities and scientific departments of nature reserves. Subsequently, he became an honorary president of the society.

Mikhail Anatolyevich Voinstvensky belonged to a pleiad of scientists, who in many ways determined the level and main directions of Russian ornithology in the second half of the 20th century. Like every talented researcher, he possessed a wide range of scientific knowledge, including paleontology, zoogeography, conservation, philosophical foundations of biology.

In the last years of his life, Mikhail Anatolevich paid much attention to philosophical issues concerning the origin and evolution of ecosystems and the biosphere. In a detailed analysis of Darwin's theory of the origin of species, he proposed a new approach to the consideration of these processes from the point of view of modern scientific research, primarily questions relating to natural and artificial selection. On the basis of the careful analysis, he draws the following general conclusions:

1. Natural selection in nature is not carried out with the help of certain factors of the external environment but it is a complex process in which a well-coordinated, organized "mechanism", consisting of many system blocks, participates.

2. The most important, the main transforming mechanism is the external environment, which is the organized primary ecosystem - biogeocenosis.

The scientist focused on the fact that when studying the evolution of the biosphere, this process should be considered as a stage of development of the entire geosystem and try to understand which physicochemical and biological laws caused the emergence and development of the biosphere as the energy envelope of the Earth, protects the geosystem from energy leakage to the space. The analysis of the structural and functional organization (SFO) of biological and mixed systems (ecosystems), features of their historical development (evolution) makes it possible to establish for these systems the following patterns:

a) self-development towards the complication of SFO, the accumulation of information (negentropy)

b) the degradation of the already achieved level of organization.

These two tendencies or forms of the eternal motion of matter are inherent in all systems which are known, regardless of the level of their organization. Their main feature is self-development in the direction of the complexity and integration of SFO, the intensification of energy exchange processes and the accumulation of information (evolution). This great work was published on the 80th birthday of Mikhail Anatolyevich.

In addition to purely scientific interests, Mikhail Anatolyevich was an enthusiastic fisherman, hunter, animal photographer, and even in his hobbies, he was also a professional who consulted fishermen, hunters, and photographers. He was a sincere, kind and cheerful person, with every interlocutor he spoke without arrogance. During conversations with colleagues, he always had wonderful jokes, necessarily connected with the topic of conversation. For students and graduate students, despite the difference in status and age, he was a senior friend, we all loved him and in every possible way tried to imitate. In this sense, Mikhail Anatolyevich remained for us not only as a teacher by profession but also as a teacher in life.