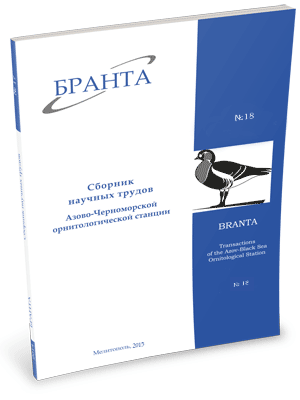 The Whiskered Tern of lakes Kartal and Kuhurlui (Odessa region).

The paper presents results of field studies on the number and distribution of nesting groups in monospecies and mixed colonies of Whiskered Terns (Chlidonias hybrida Pall.) at the Danube floodplain lakes Kartal and Kuhurlui for the period 2010-2012. Basing on the comparison of earlier published data (Potapov, Kinda, 1998, Potapov, 1999, Nesterenko, 2000) and our results there were assessed trends in the number of the Whiskered Tern at lakes Kartal and Kuhurlui. At both studied reservoirs the positive dynamics was revealed. In fact, for the last 15 years the number of the Whiskered Tern at these lakes has several times increased and currently exceeds 2,500 pairs. There are no noticeable changes in location of the colonies. However, the number of nesting terns in them varied and considerably increased. Major factors, having impact on distribution of a nesting group of Whiskered Terns in the region and correspondingly on the number dynamics as well, are changes in the area of main vegetation communities in the course of successions and fluctuations of hydrological regime of waterbodies.