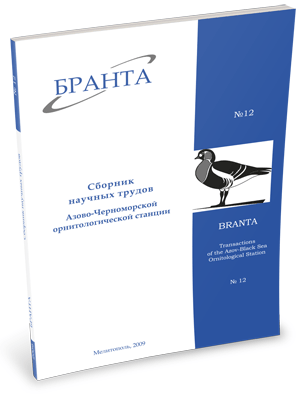 In Ukraine two zones are distinguished with mass seasonal movements of the White-fronted and Bean Geese. These two migratory routes have a common latitude direction, i.e. common direction of spring passage – east and north-east, and that of autumn – west and south-west.

The most numerous of them crosses the Azov-BlackSea region linking wintering sites of the White-fronted Geese at the Black Sea and Central Europe with their breeding grounds in Siberia. Migrations of the Bean Goose are poor pronounced in the region. This migratory route includes marine areas of southern administrative regions and steppe areas of the Crimea being 100-150 km wide. During seasonal migration this region is crossed by 1 to 1.5 mln the White-fronted Geese.

The second zone of mass migration movements of geese in Ukraine lies in its southern half. A bulk of geese follows the Polessye migratory route which includes the northernmost areas of the country. Though many birds migrate far to the south from this migratory route reaching central areas of Ukraine, a general direction of migration still is latitudinal. The north migratory route is formed by the birds wintering in West (White-fronted and Bean Goose) and Central Europe (mainly Bean Goose and a part of the White-fronted Goose). Birds from the Middle Danube Depression in spring arrive to Ukraine through the Carpathians.

The north half of Ukraine each spring is passed 120 to 300,000 ind. of the White-fronted Goose and approximaltely 100-200,000 Bean Geese. In autumn the migration intensity is much lower, and does not exceed 30,000 White-fronted Geese and 50-100,000 Bean Geese. The reason is that in autumn the most of geese wintering in Central and Western Europe migrate further north than Ukraine. For the spring migration an important stopover, holding dozens and hundreds of thousands of birds, is the Left-Bank Ukraine, especially Chernigov, Sumy, Poltava and Kharkov administrative regions.