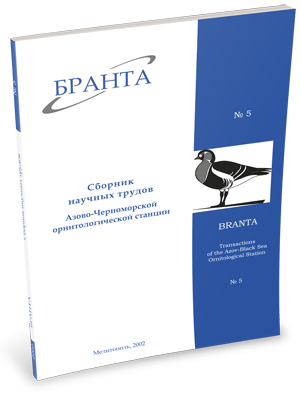 Language of the article: Russian Cite: Pilyuga I, V. . (2002). A discovery of Common Scoter on the wintering grounds in the Crimea.. Branta: Transactions of the Azov-Black Sea Ornithological Station, 5, 157-158 Views: 465

A discovery of Common Scoter on the wintering grounds in the Crimea.

The Black Scoter (Melanitta nigra L.) is a rare vagrant species for Ukraine. There were only 10 records of the species in XIX – XX centuries.

Three flocks of wintering Black Scoters with the total number of 103 individuals were seen at the Black Sea coast stretching 9 km east of Opuk Mountain (Crimea, Kerch Peninsula, near Yakovenkovo village). This is the first case of a large stray group of the species to Azov-Black Sea region and Ukraine.

Among the possible causes are invasion, change of the wintering area etc.